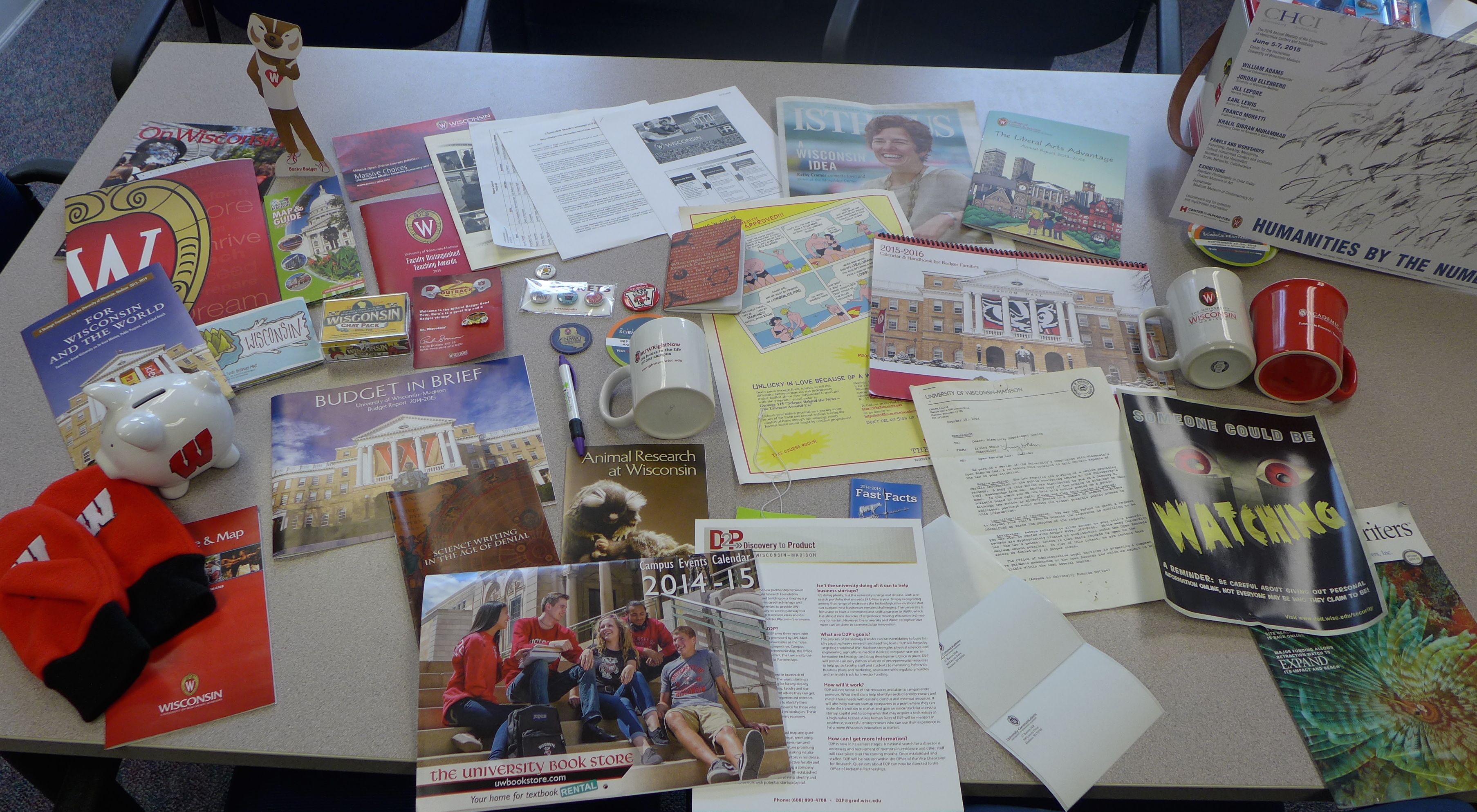 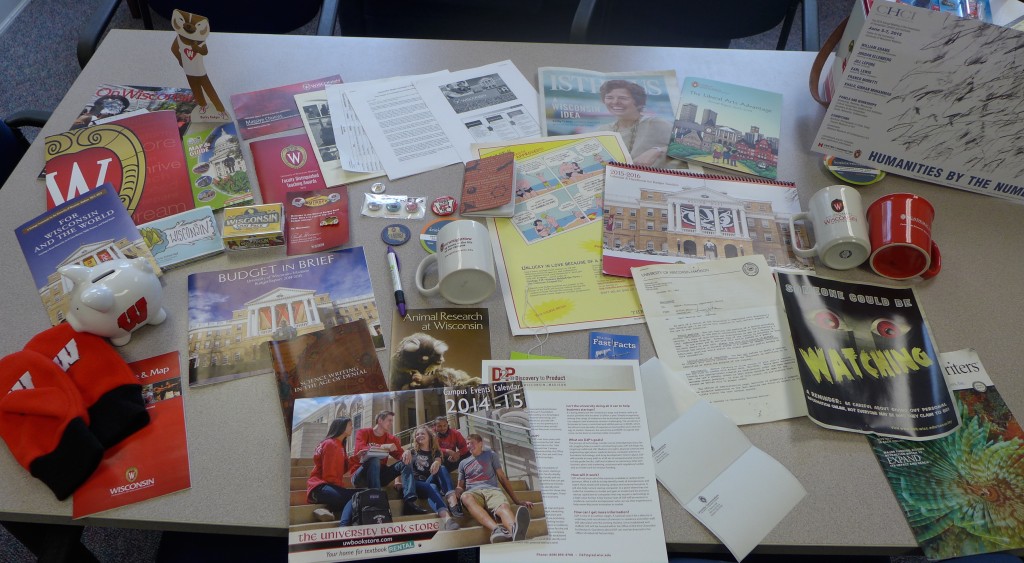 A haphazard display of the contents of the 2015 Bascom Hall time capsule, just before interment.

Articles and objects representing the University of Wisconsin-Madison circa 2015 were boxed and buried under the new maple floor in the center of the rotunda in Bascom Hall. Bascom, the third-oldest building at UW-Madison, is University headquarters.

Carpenters for Bachmann Construction, Madison, sealed the box just before noon, then nailed down the plywood subfloor. 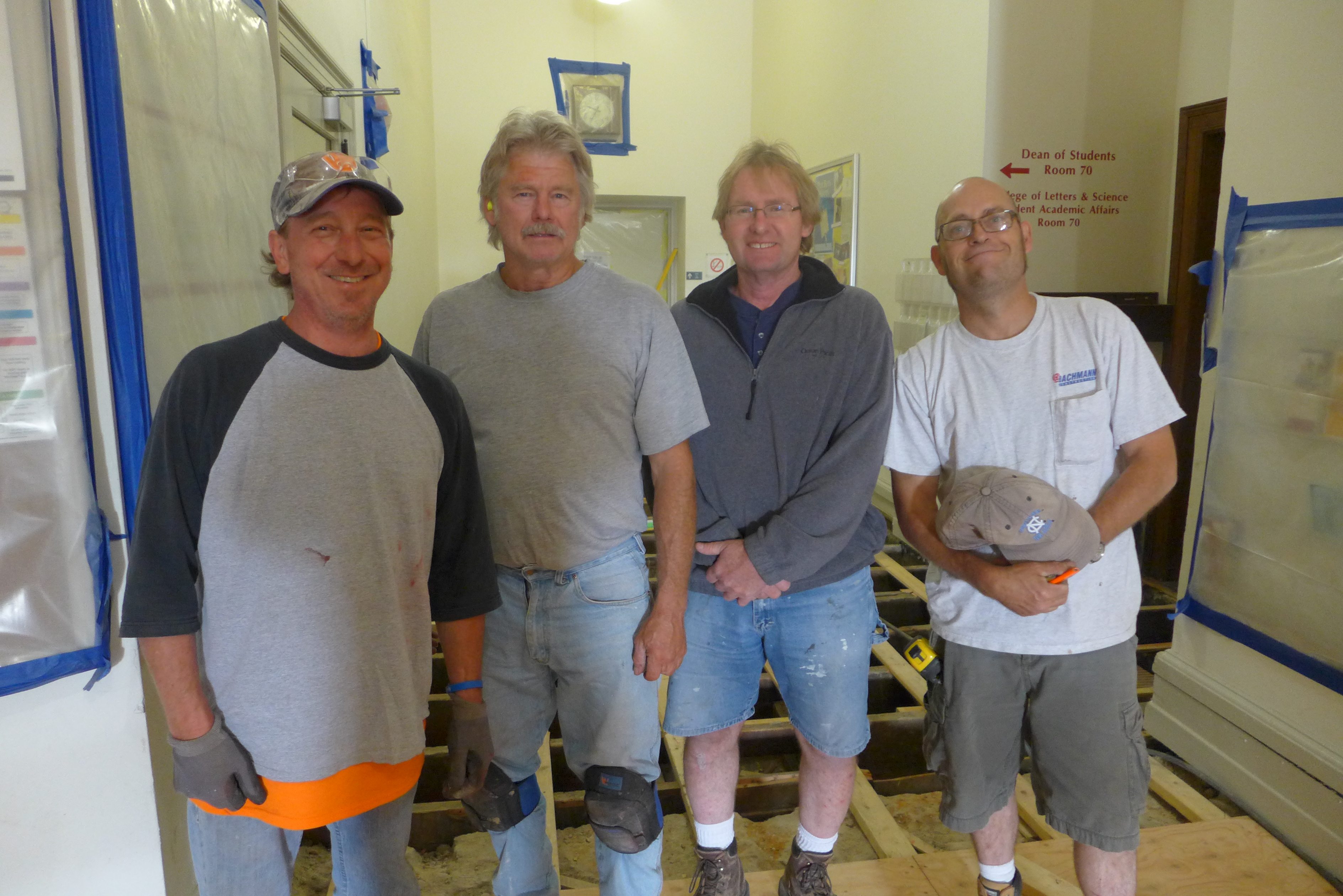 From left: Keith Stenjem, Tim Ellickson, Jim Zbigniewicz and Tim Woods under the rotunda in Bascom Hall on Thursday, July 2, 2015, as they neared completion of the subfloor that will hide the time capsule and support the new maple floor.

The contents included an already-venerable memo on open records issued by Chancellor Irving Shain in 1984, a 2015 Isthmus cover story on Kathy Cramer, head of the Morgridge Center for Public Service, a Wisconsin map, brochures on animal research, science writing in the age of denial, and the state budget as seen from the University’s viewpoint.

Other objects included a “Welcome, Students” button, a coffee mug, a 24-hour documentation of the life of the campus last held in 2013, a UW-Madison piggy bank with some coins, mittens with the University W, a coaster for the Wisconsin Science Festival, University calendars, a Bucky Badger cardboard standup (not life-size!), and an ominous “Someone Could Be Watching” placard from the Division of Information Technology. 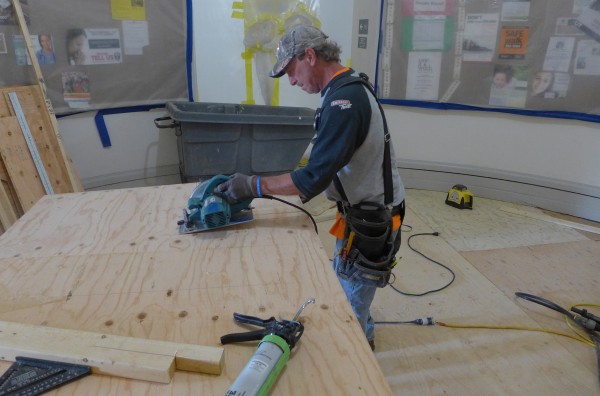 Keith Stenjem cuts subfloor for the rotunda in Bascom Hall.

“We saw these open joists in the Rotunda, and thought, what a great opportunity to help future generations remember what things were like way back in 2015!” says brainstormer-in-chief Eden Inoway-Ronnie, senior special assistant to the provost, who works adjacent to the burial site. “We were impressed at how seriously the carpenters took our request…even to the point of precisely placing the box under the center of the rotunda.”

The Why Files contributed a pen; Post-It notes; and a cartoon poster styled after the old comic-strip strong-man adverts, plugging a for-credit geoscience course based on The Why Files that has been taught on campus for more than 10 years. The Why Files, an Internet science magazine for popular audiences, was first published in 1996.

The capsule — in reality a metal picnic basket — was sealed with silicon caulking and laid to rest in plywood framing that will prevent it from braining any workers who remove the ceiling below. 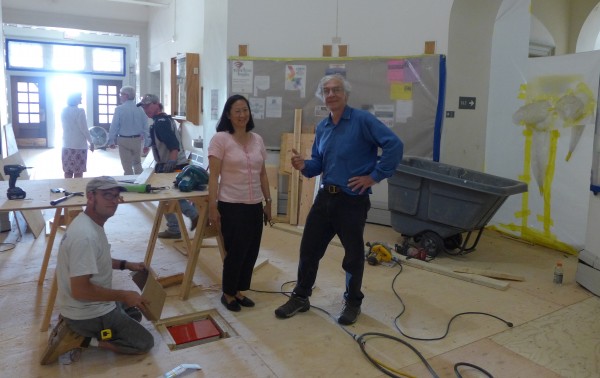 Time-capsule brainstormer Eden Inoway-Ronnie and author-photog David Tenenbaum just before the capsule disappears from view for a century, give or take.

We’ve heard that the maple floor will pay for itself in a half century by obviating the continual replacement of vinyl tiles. There’s no question which is more beautiful, or more historically appropriate. (Vinylite, the vinyl tile that first reached the market in the 1930s, contained asbestos, but the tile used in Bascom tested negative for that carcinogen.)

There is the Gutenberg question: How archaic will printing on paper seem when the capsule is opened? Indeed, there’s no way to know if or when the time capsule will ever be opened. But based on the quality of the carpentry that went into the framing, subfloor and finish floor, one century is a reasonable first approximation.

**Update 7 July 2015 9 am – Story was updated to reflect that Bascom Hall is the third oldest building on campus, according to a reader who also happens to be a historic and cultural resources manager at UW-Madison. According to the reader, there is already a time capsule behind the iconic “Sifting and Winnowing” plaque on the facade of Bascom. 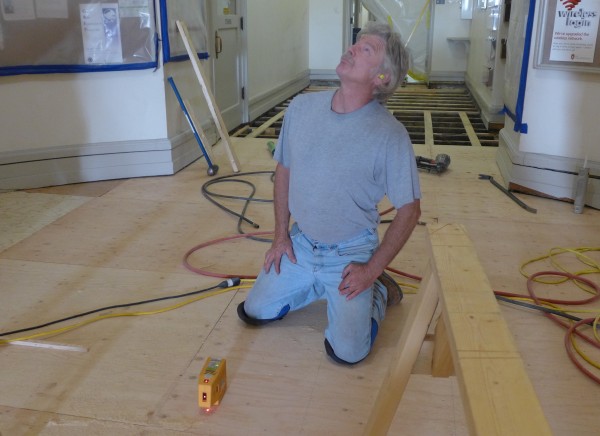 Getting the center just right