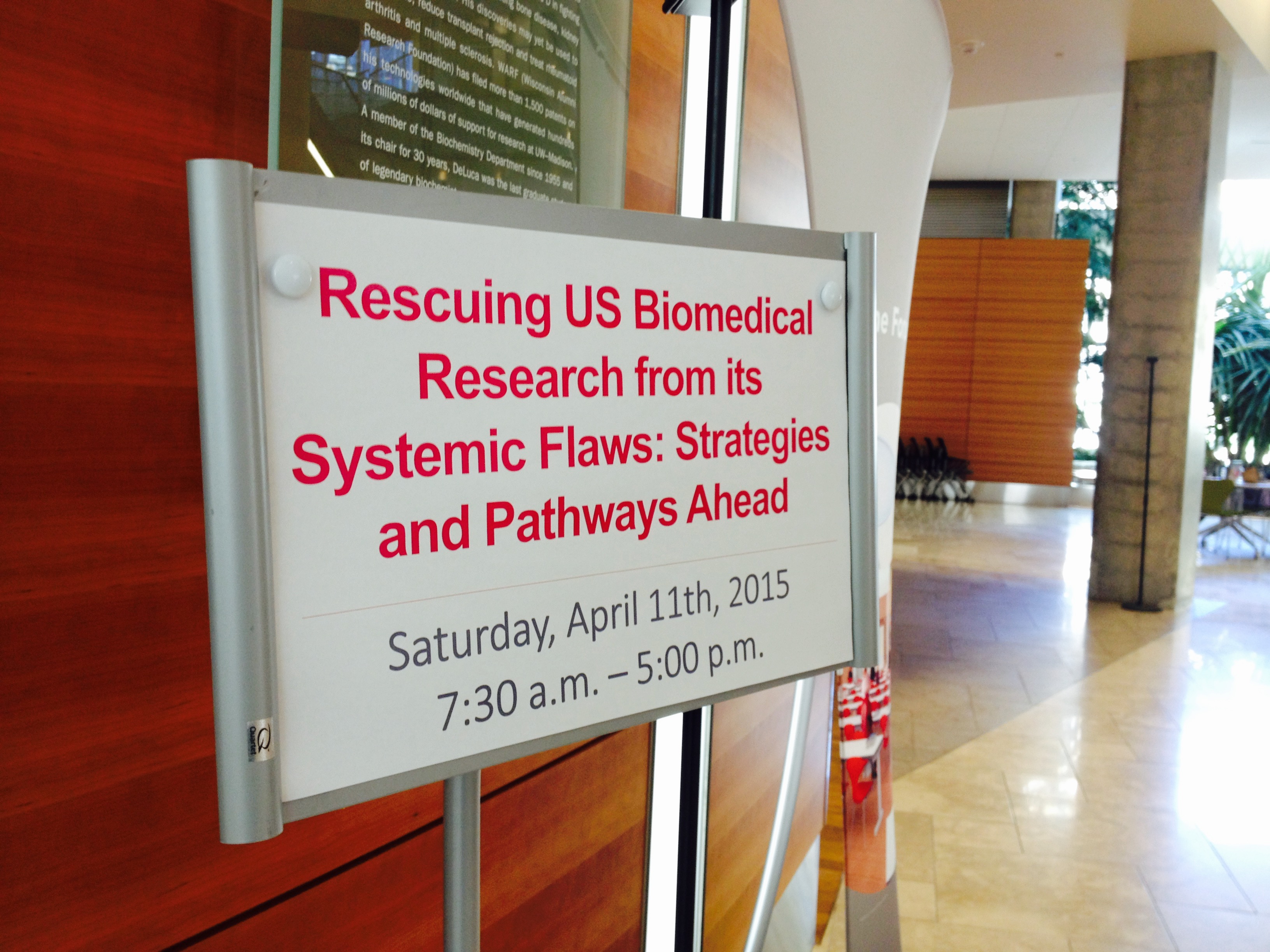 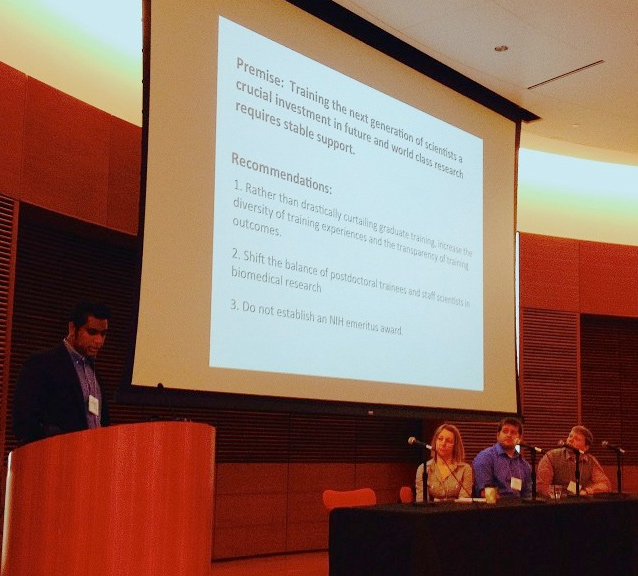 Kris (Krishanu) Saha, UW-Madison professor of biomedical engineering, speaks before an audience of more 100 attendees – including university and national leaders – at a workshop geared toward solving systematic problems in biomedical research on April 11, 2015.//Photo by Kelly Tyrrell, UW-Madison

On a sunny, warm Madison Saturday, more than 100 scientists, students, postdoctoral researchers and national leaders gathered at the Wisconsin Institutes for Discovery to address a growing storm: the systemic flaws threatening the future of the national biomedical research enterprise. After weeks of campus-wide brainstorming – which brought together junior and senior faculty, academic staff, graduate students, and postdocs – UW-Madison presented its recommendations for solutions, which will be published nationally in the coming months.

The workshop is a model for how universities across the country should be working to help solve the problem, said Bruce Alberts, former National Academy of Sciences president and one of the authors of a 2014 PNAS paper that started the conversation. Alberts attended the April 11 workshop, along with co-authors Marc Kirschner, Systems Biology Chair at Harvard University, and Shirley Tilghman, former president of Princeton University. Jo Handelsman, a UW-Madison grad, former faculty member and current associate director for science at the White House Office of Science, Technology and Policy (OSTP), was also at the event.

“The model here should be spread to every campus in the U.S.,” Alberts said. “The ‘normal’ way is to appoint a bunch of deans to organize sessions but it’s inspiring the way sessions here were led by experienced people and by dynamic young people … This needs to happen over and over again.”

Tilghman called UW-Madison’s approach “a model for the conversation that could be happening.”

The workshop, and the intensive sessions that preceded it, focused on the primary problem: Too many scientists asking for a piece of the a shrinking federal funding pie. This has created a hypercompetitive environment that is harmful to biomedical research and the scientists who conduct it – including those currently pursuing degrees in science – the national biomedical research policy leaders argue.

“The models of training and funding that we have come to depend on in recent decades may require substantial reform,” UW-Madison Chancellor Rebecca Blank said Saturday. “Things have changed, and that demands we change the way we do business.”

UW-Madison has long been a leader in biomedical research, from revolutionizing nutrition science to introducing human stem cells to the world. With its current efforts – spear-headed by Judith Kimble, Vilas Professor of Biochemistry at UW-Madison and Howard Hughes Medical Institute Investigator, and Marsha Mailick, Vice Chancellor for Research and Graduate Education – UW-Madison is well-positioned to be a leader in guiding its future, as well.

Over the last decade, NIH funding for biomedical research has decreased by 25 percent when inflation is taken into account, Kimble said. Meanwhile, fewer NIH grant proposals are met with success. Since 2000, the success rate has been cut in half.

“The fact that funds are going down while costs are going up is untenable, it’s unsustainable,” said Kimble.

While finalized specific recommendations are to come, the following principles and priorities emerged from the pre-workshop discussions and were presented at the April 11 event:

Next month, the University of Michigan will host a 3-day workshop focused on the future of graduate and postdoctoral training, but UW-Madison has already shown itself to be a national leader by being first to provide:

“We really have a very engaged voice, that’s clear from today,” Kimble said. “We don’t have a consensus, but still, we are trying to get things on the table to move forward.”

One thought on “Casting out the life preserver: UW-Madison presents ideas to rescue national biomedical research”