No matter where you are, you can’t help but notice the new buildings slowly rising above the streets of University of Wisconsin-Madison’s campus. These new spaces are poised to enrich campus life for both students and faculty by providing new opportunities for education, culture and recreation to all on campus — and they wouldn’t be possible without cutting edge technology. 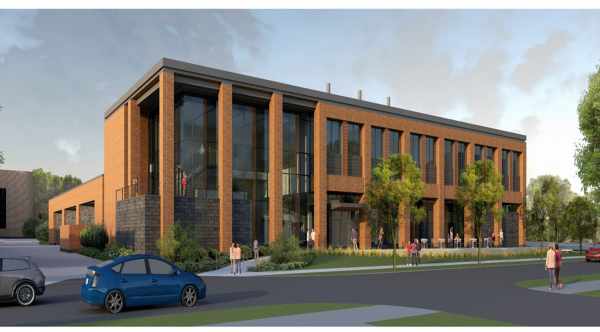 The Meat Science and Animal Biologics Discovery Building will provide new meat processing and education opportunities to many on campus. Photo courtesy of the department of meat sciences.

Situated between the Veterinary Medicine building and the Natatorium, the new home for UW–Madison’s Meat Science program seeks to vastly improve the meat processing and teaching facilities currently on campus.

“This is the most complex building that the state has ever built,” says Jeff Sindelar, associate professor in the Department of Animal Sciences.

Using new technologies like blast freezing and pass-through smokehouse ovens, the building is designed to operate under Federal (USDA) meat processing requirements. Students can observe and learn about the process in the specially-designed lecture halls.

The two lecture halls face each other with a demonstration cooler in the center between them, allowing for demos ranging from carcass evaluation to sausage making to be performed. Large glass panes allow observers a view into the cooler, which is equipped with an AV system so students in the hall can speak with the lecturer inside. Rolling camera carts will be used to display images and video of the demonstrations to students.

The Meat Science program works with many schools and departments to provide research materials, and at any stage of the process, researchers can collect biomaterial samples.

The second floor contains a shared research lab, and a new retail store will be opened called Bucky’s Varsity Meats, which will sell various fresh and processed meat products like steaks and sausages.

The building is scheduled for occupancy in early March 2019 with a grand opening on April 12th. 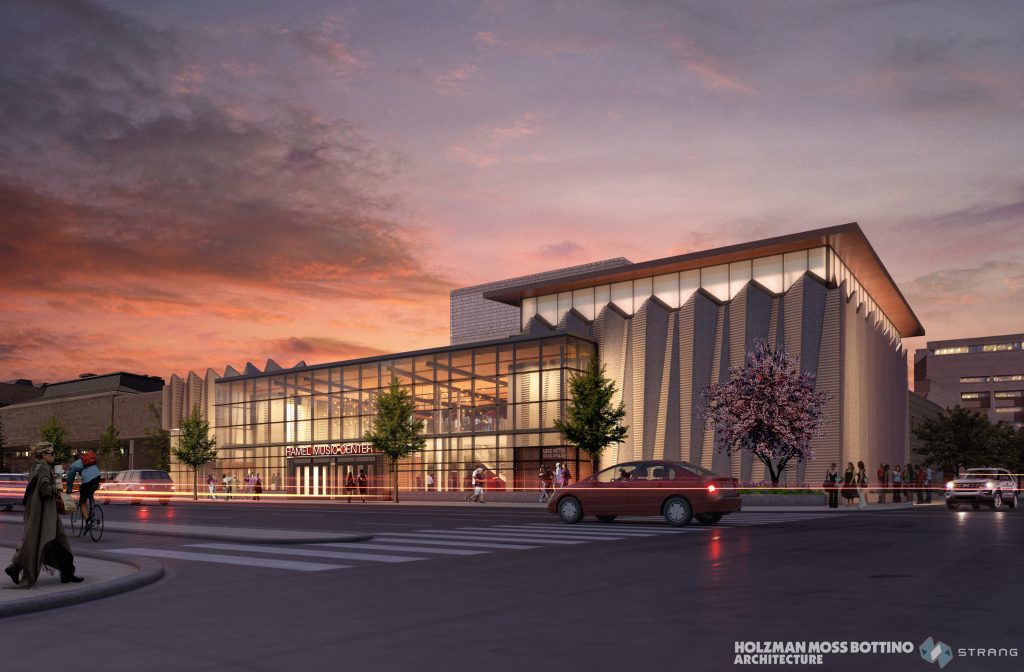 The Hamel Music Center will elevate music performance events for UW-Madison’s school of music. Photos courtesy of the Mead Witter School of Music.

Live music seems to be surging in popularity among Madisonians these days. New venues like the Sylvee and existing ones like the Orpheum and Majestic theaters bring in brilliant acts every year. And now, a new kind of performance center is under construction on campus, one specifically designed for the needs of UW–Madison’s Mead Witter School of Music. Located at the corner of University Avenue and Lake Street, the new Hamel Music Center is designed with three acoustically-isolated performance areas, each serving a different function.

The primary concert hall holds over 600 listeners and is designed with unique circular insets in the walls to aid in sound deflection. Some of the circular cutouts actually pass the sound into reverberation chambers that flank both sides of the concert hall. These chambers are designed to increase sound reverberation for listeners, which creates a wider soundstage and better listening experience for patrons.

The large number of surfaces the sound can reflect off lets listeners hear sound coming from all directions of the hall, creating an enveloping experience which draws the audience into the music.

Also featured in the Hamel Music Center is the Collins Recital Hall, which has over 300 seats and is suitable for slightly smaller performances. Finally, a large-ensemble rehearsal hall and recording room is situated on the southwest corner of the building, which features a large corner window that allows sidewalk-goers to view the music performance inside. 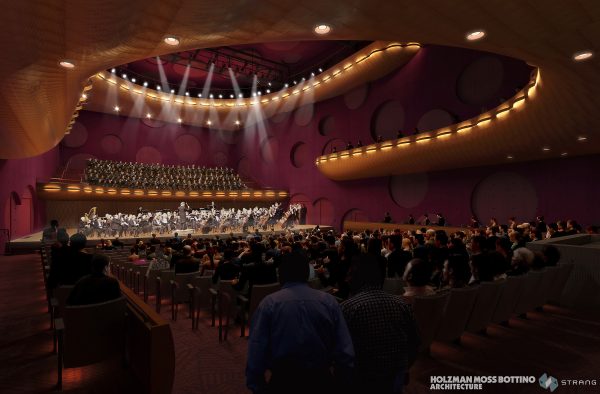 The primary concert hall contains 641 seats and features large circular cutouts in the walls to aid in sound dispersion.

Having three music halls within one building not only creates a spatial challenge but also a sonic one — the architect and acoustician wanted to ensure each performance room was acoustically isolated from the others. This is done by essentially constructing three buildings in one, and ensuring that no hard surfaces — which could conduct vibrations to other parts of the buildings — exist between them. The walls are separated using an acoustic joint, which is a two-inch gap surrounding each hall to isolate them.

“Having no rigid connections between rooms is incredibly important for a building like this,” says Brian Heller, the facilities director for UW–Madison’s music school.

And how do you go about creating a performance hall that’s built on one of the noisiest intersections on campus?

The answer revolves around the massive concrete, accordion-like walls that surround parts of the building. These walls are 10 to 12 inches thick and are key for repelling the roaring engines and blaring sirens passing outside.

The Hamel Music Center is funded entirely through donors and is scheduled for opening in Spring–Summer 2019. 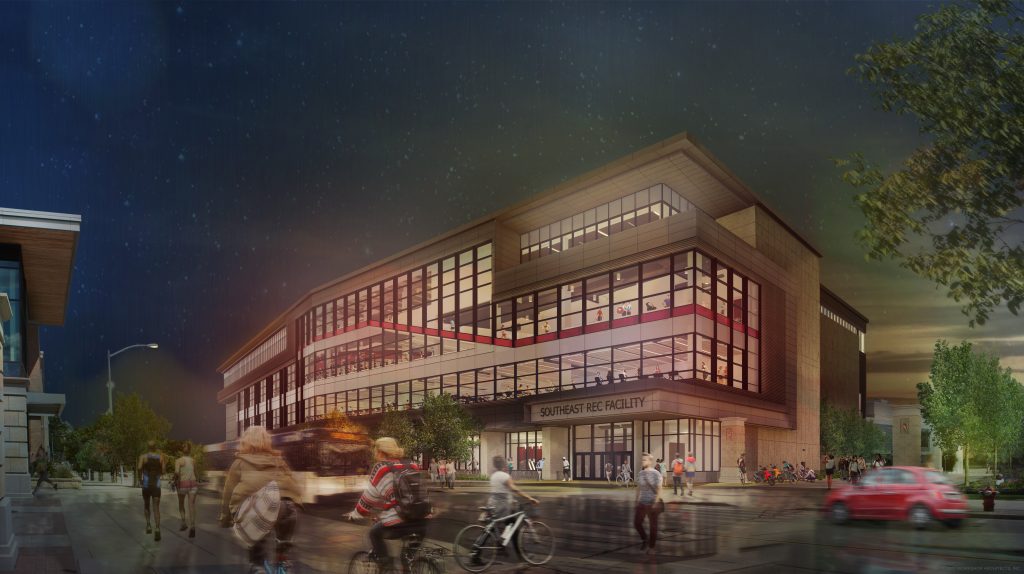 When the university put out a 2014 referendum to student voters on whether they approved of replacing the old SERF, it passed with overwhelming support. Students wanted updated and expanded workout spaces — and their input was crucial to the architects of the new building.

“Students are used to technology at this point, and they’ll expect that when they come into the new building,” says John Horn, director of RecSports. “Everything we are doing has a technology-first theme to it.”

Each piece of cardio equipment will be equipped with TV screens, and the building will provide opportunities for users to track their workouts with technology within the facility.

The Nicholas Recreation Center is built on the site of the old SERF building, and increasing the recreation area by six times on the same footprint presented a challenge to the designers.

“Given that we only had the same city block of space, our goal was to build up,” says Horn.

With five levels of activities, the designers had to maximize the available vertical space. Directly above the Olympic-sized swimming pool and separated by an acoustic ceiling sit six full-sized basketball courts, to accompany two more courts on the ground level. 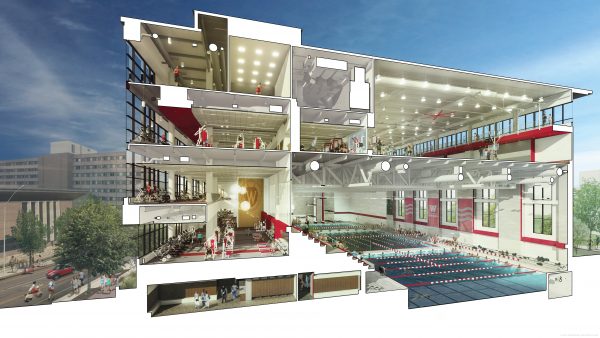 To help add even more available space, one-third of the main pool is equipped with a movable floor.

The builders are aiming for a late fall 2019 opening, and it will likely become one of the most prominent buildings of the southeast neighborhood of campus. And according to Chancellor Rebecca Blank, it will enhance student life for the next generation of students.

“It’s difficult to imagine a project with more of an impact across campus. To our students, the Nick is going to be a place to form healthy habits that we hope will last them for a lifetime, as well as to meet new friends, cross paths with people they might not otherwise know, and learn some new skills,” said Chancellor Blank at the groundbreaking ceremony. “All of those things are vital for preparing them for healthy and fulfilling lives.”

One thought on “How the new UW buildings will transform campus”