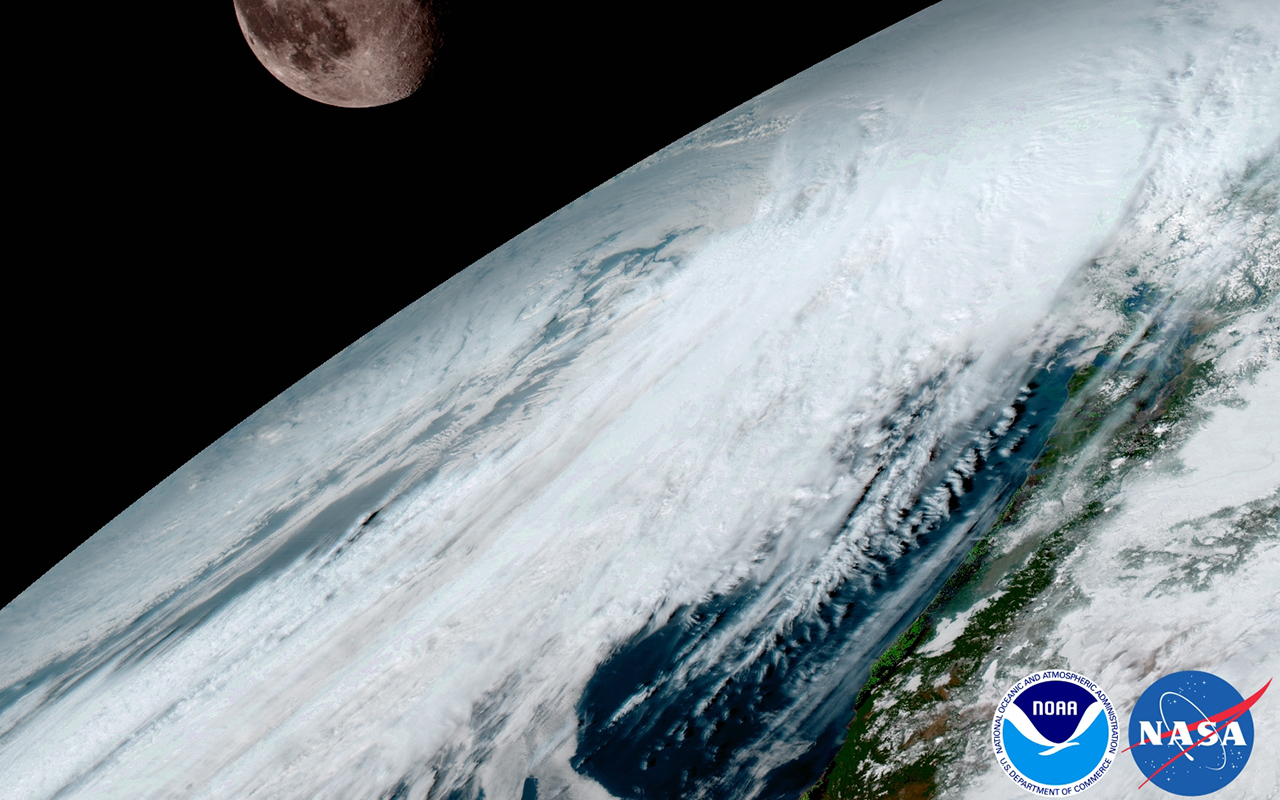 The moon is visible over the Earth in true color from GOES-16. The satellite will monitor the moon’s shadow during the solar eclipse on August 21, 2017. (NOAA/NASA)

On August 21, the continental United States will have its best view of a total solar eclipse in nearly 100 years. If you want a good view from here on the surface, you might have to get in the car and drive to towns like Salem, Oregon; St. Louis, Missouri; or Nashville, Tennessee. And then cross your fingers for a clear, cloudless day.

But from 22,000 miles up, the new GOES-16 weather satellite, designed and tested with help from the University of Wisconsin–Madison’s Cooperative Institute for Meteorological Satellite Studies (CIMSS), will have a bird’s-eye view of the entire eclipse. While we’ll be looking for the moon completely blocking the disk of the sun, GOES-16 will see the lunar shadow cross the country over the span of about 90 minutes. Using the satellite’s new suite of rapid, true-color imagers, GOES-16 will likely provide the fastest, best view of a solar eclipse ever captured from space.

Normally, weather satellites take images of the full disk of the Earth every 15 or 30 minutes. With its Advanced Baseline Imager system, GOES-16 should be able to provide scans every 5 minutes during the eclipse. GOES-16 is also equipped with two mesoscale imagers, which can each scan an area the size of a handful of states every minute. Tim Schmit, a research satellite meteorologist with NOAA who works at UW–Madison’s CIMSS, is planning to submit a request to combine both mesoscale imagers to monitor the path of the moon’s shadow every 30 seconds. With this ultrafast time resolution, and the stunning return of true color, the satellite should provide researchers and the public alike with a truly unique view of this solar eclipse.

“Often when people think of a solar eclipse, they’re on the surface of the Earth looking at the sun,” says Schmit. “This is kind of a different perspective — What if you were on the moon, looking at the Earth? What would you see?”

This kind of data could provide a useful natural experiment — for example, testing just how much a two-minute gap in solar radiation affects surface temperatures. GOES-16 has already monitored its first eclipse, which passed over the southern tip of South America on February 26. Animations from this eclipse, while fascinating, show the limits of 15-minute imaging intervals; the moon’s shadow is only visible in a small number of frames. 15 minutes is simply too slow for any research looking at conditions immediately surrounding the passing shadow — totality only lasts a couple of minutes at any particular location.

GOES-16 is the latest in a fleet of geostationary weather satellites managed by the National Oceanic and Atmospheric Administration, NOAA. By matching the rotation of the Earth above the equator, these satellites provide a continuous view of one portion of the planet. While their visible-light imagers require reflected sunlight to work, these satellites also monitor infrared light, giving round-the-clock coverage, even when the sun is on the other side of Earth. By measuring cloud height and temperature, lightning strikes, surface temperatures and more, the satellites allow meteorologists to better predict the weather and maintain a close watch on strong storms, like hurricanes. These continuous images even allow citizen scientists to help classify storms, which helps better predict future hurricanes.

“Unfortunately we have to wait until 2099 for the eclipse to come over Madison, Wisconsin,” explains Schmit. From UW–Madison, we’ll see about 85% of the sun’s diameter covered by the moon. To do better, you’ll have to follow Schmit’s lead. He already has his hotel room booked for south of St. Louis.