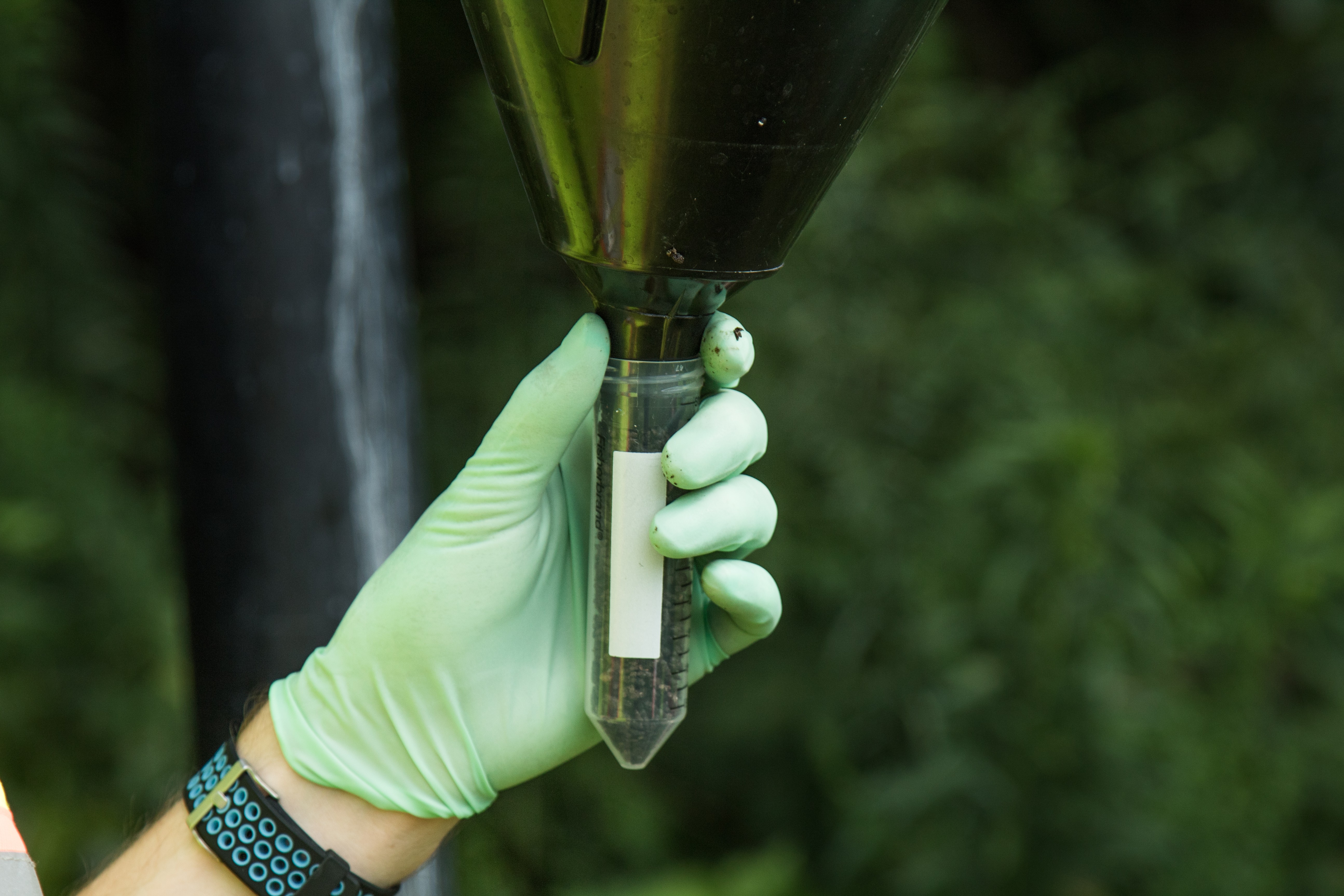 On the walk into the Lakeshore Nature Preserve on the morning of Wednesday, July 25, to collect samples of bat poop, or guano, Kyle George, a lab worker with the United States Geological Survey, remarked on how much guano the bats produce.

“It’s a lot more than you would expect,” George laughed. In just one week, the Lakeshore Nature Preserve’s colony of little brown bats produced two 100 milliliter vials full of the tiny black pellets, about the volume of a shampoo bottle, one of George’s larger samples.

George takes the samples each week back to the National Wildlife Health Center in Madison, Wisconsin. According to George’s colleague there, wildlife disease specialist Anne Ballmann, the guano could be useful for detecting a type of harmful fungus that infects the bats, called Pseudogymnoascus destructans. The fungus causes deadly white nose syndrome, a disease responsible for killing millions of bats across the country since an outbreak that was traced back to the winter of 2007-2008, according to the USGS.

The bats have summer roosts in bat boxes in the Lakeshore Nature Preserve, a 300-acre, four-mile stretch of wooded forest on the northern edge of the University of Wisconsin–Madison’s campus. It is a popular park for picnickers, naturalists and joggers, but because of the high biodiversity and accessibility, the Preserve is also a classroom for students and professors, as well as a laboratory for researchers.

“People stop by because some of the study sites are right off the trail, so we get a lot of curious folks who stop by and ask what the project is about,” Ballmann said. “We go through our spiel of informing them about the disease white nose syndrome and how the bat populations are suffering because of that and what our research is all about” 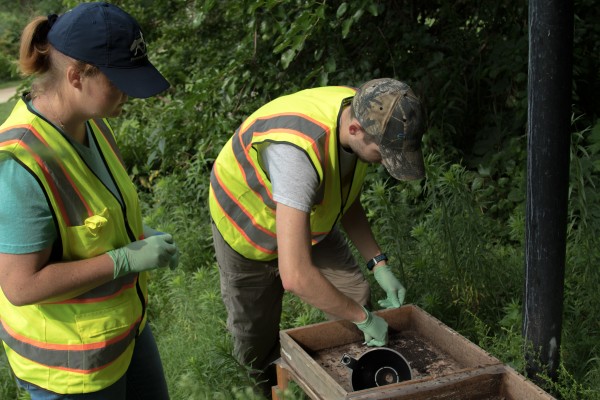 Having well-monitored hibernation sites is crucial for collecting the samples. The fungus prefers cold, damp environments, making the bat’s winter hibernation sites the ideal home. It grows as a white fuzz on the sleeping bats, eating holes in their wings, putting them at a serious disadvantage when the bats awaken to catch fast-moving insects in the spring.

The disease also causes bats to wake more frequently from hibernation. The stirred bats will groom themselves to remove the fungus and fly about, ingesting the fungus and wasting their winter fat reserves, sometimes starving. The fungus can also affect electrolyte regulation in bats, dehydrating them.

The standard diagnostic method to test for white nose syndrome is a skin swab test, which researchers administer after netting and sedating the flying mammals.

The guano-sampling has the potential to skirt some of the limitations of the skin swabbing, elimating the hazards involved with netting them and especially the need to physically handle animals, an activity for which Ballmann and her partners receive a rabies vaccine.

But while the Preserve provides a valuable testing ground for bats, it’s also useful for studying another one of its most abundant residents: trees.

Kim O’Keefe, a plant ecophysiologist in the botany department at UW–Madison, studies certain species of trees in the Lakeshore Nature Preserve to determine each plant’s stem hydrology, or how much water the plant can process.

When a plant sucks water up through the soil, it travels through vascular tissue in the stems and up to the leaves, where it is released through transpiration. But in a hot and dry environment, transpiration rates can exceed rates of water intake, causing stress in the trees. When a tree becomes stressed, air bubbles form in the vascular ducts, stopping water flow.

“A big part of our research is trying to understand various traits that allow plants to overcome this,” O’Keefe says.”Particularly with climate change and as the environment is getting drier and hotter, this will become more of an issue.”

The method O’Keefe wants to perfect involves cutting branch segments from several different species of trees, rehydrating the dead stem and then placing it in a centrifuge where the stem is spun to simulate stress.

The stem is then inserted into an apparatus that runs water back through it. Finding the difference between the amount of water that enters the stem segment and the amount that exits on the other side shows O’Keefe how much water the plant actually drinks.

Perfecting this method would provide a test to determine a tree stem’s storage capacity during dry weather versus wet weather, a useful trait to understand as weather grows more variable and rain events become more spaced out, O’Keefe says. It is a work in progress, but the accessibility of the Preserve plays a large role in assisting the research.

“Its so easy to bring undergraduate students out there to help me sample and to help them identify trees and teach them techniques in sampling and measurements,” O’Keefe said. “And I think there are opportunities… to increase public awareness of the ecosystem around them.”