Finches studied by Peter and Rosemary Grant in the Galapagos Islands, where variations in food and habitat gave rise to numerous species which caught the eye of visitor Charles Darwin. // Photos courtesy Princeton University Press.

Peter and Rosemary Grant spent about 40 years of field study focused on the finches of one of the many Galapagos Islands, a feat of evolutionary biology research that outstrips Charles Darwin’s own visit to the archipelago by about 40 years minus five weeks.

Such a long-term project (and the Grants is regarded as the longest continuous study) seems almost necessary to capture changes attributable to long-term forces driving evolution. But it was only a few years weighing and measuring finches on the island Daphne Major before — as acclaimed finch book author Jonathan Wiener wrote last year in the New York Times — “the Grants and their students realized that the finches’ dimensions were changing before their eyes.” 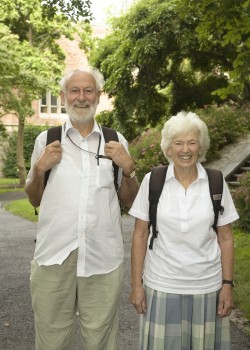 Rosemary Grant will talk about the surprising speed and power of evolution Thursday as the guest for the Zoology Department’s annual John T. Emlen Invited Lecture. Free and open to the public, Grant’s lecture will begin at 3:30 p.m. in Room 132, Noland Hall, 250 N. Mills St.

Like many who study evolution — including UW–Madison contingents — Grant and her husband, both Princeton University emeritus professors, have taken advantage of the Galapagos Islands’ remote location, lack of human impact and reliably extreme shifts in rainfall to study the way pressure from environment, competition and genetics has pushed the evolution of closely-related species of animals separated by small (but often impassable) expanses of ocean. In particular, the Grants have worked to describe the three hurdles to development of a new species: colonizing territory, developing unique physical and behavioral traits, and the barrier that keeps one species from reproducing with another.

The duo’s work on Daphne Major was the subject of a book they published last year, “40 Years of Evolution: Darwin’s Finches on Daphne Major Island,” that shares a title with Rosemary’s Emlen Lecture.

John T. Emlen was a professor of zoology at UW–Madison from 1946 to 1974, and a specialist early in his career in ornithology — including a great deal of his own field work with birds in Wisconsin. He also joined his student George Schaller in important field studies of African mountain gorillas and contributed crucial voucher specimens of African birds and mammals to UW–Madison’s Zoology Museum. Emlen left a fund to the department aimed at supporting undergraduate research, and every year the students and faculty in the Zoology Department select a speaker to invite for the Emlen lecture.