Home » Uncategorized » Fructose can trigger viruses in the gut’s microbiome

This is a guest post by Amelia Liberatore, a marketing intern with the UW–Madison Department of Food Science.

The human gut is a complex ecosystem dominated by bacteria that help digest food and keep one’s gastrointestinal tract in check. One population that lives in the gut are so-called lysogenic bacteria, which are bacteria that contain dormant viral DNA. When these lysogenic bacteria are exposed to a stressful condition, the viral DNA is activated and produces viruses. Recently, it has been suggested that diet, specifically dietary sugar, can be one of these triggers.

After nearly four years of testing, Jan-Peter van Pijkeren, a University of Wisconsin–Madison professor of food science, and his research team have unraveled a mechanism that explains how fructose — a sugar increasingly common in the diet — triggers the production of viruses in the gut. When the gut symbiont Lactobacillus reuteri is exposed to a fructose-enriched diet, it produces acetic acid, which in turn triggers the production of viruses.

“Approximately 50 percent of the viruses that we carry along in our gastrointestinal tract are derived from those lysogens,” explains van Pijkeren, whose research focuses on understanding the mechanisms that underlie bacteria-host interactions. “Up until this point, we had no understanding of what the underlying mechanisms were that contribute to this [activation of viruses].”

The role of bacterial viruses in the gut remains unclear. While the new findings demonstrate that the production of viruses reduces intestinal survival of L. reuteri, it is possible that these viruses can still help L. reuteri by killing other competing bacteria. Further research defining the ecological role of lysogenic bacteria combined with van Pijkeren’s latest findings could provide new avenues of research to tailor the composition of select organisms in the gut, including probiotics.

L. reuteri lives in many vertebrates, including humans. The van Pijkeren laboratory developed several genome-editing tools, which allowed them to develop L. reuteri as a model to study its viruses. They found that the normally dormant viruses of L. reuteri become activated as they move through the digestive track, resulting in the production of viral particles.

The next step was to investigate to what extent dietary sugars promoted virus production. The team decided to focus on fructose because of its abundance in the food chain. Since the development of high-fructose corn syrup as a cost-efficient sweetener in the early 1970s, average fructose consumption has increased fourfold.

Mice were fed high-fructose diets along with L. reuteri. The research team found that mice that ate fructose experienced a significant increase in the production of L. reuteri viruses in the gut when compared to animals fed glucose.

“That was an exciting observation, but we wanted to know what the mechanism was by which fructose increased virus production. So, we basically searched the DNA sequence of L. reuteri to find genes whose products could be involved in fructose metabolism. These results predicted that L. reuteri can metabolize fructose to subsequently produce acetic acid using a pathway that is conserved among bacteria.”

Acetic acid is a member of a group of chemicals known as short-chain fatty acids, which cells can use for energy. The dominant short-chain fatty acids in the human colon include acetic acid along with propionic and butyric acid. The researchers tested each of these chemicals and found that exposure to each type of fatty acid promotes the production of viruses via the same pathway that L. reuteri uses to produce acetic acid.

“So not only does fructose metabolism promote the production of viruses following acetic acid production by L. reuteri, but it’s also the exposure to short-chain fatty acids that is a trigger,” explains van Pijkeren.

Van Pijkeren’s report paves the way for future studies aiming to understand how the metabolism of a bacterium is linked to virus production, and how this can be influenced by our diet. Important questions remain, including what role these viruses play in the gut. Understanding diet-induced virus production is expected to ultimately allow researchers to tailor the robustness of select organisms, such as probiotics, in the gut and develop better ways to alter gut microbial communities

The research was published in the journal Cell Host and Microbe in their online issue on January 15 and in print in the 2019 February issue. 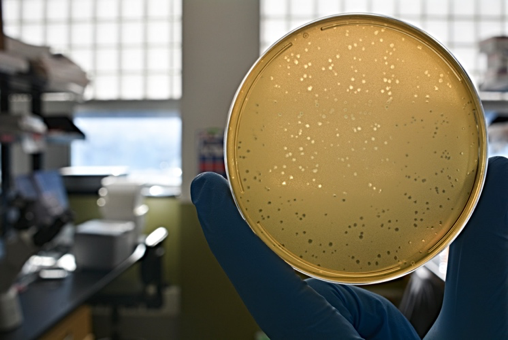 The Petri-dish is filled with solid growth medium that is covered by a lawn of bacteria. When these bacteria are exposed to a virus to which they are susceptible, one outcome is that the bacterial cells are killed. Bacterial cell killing results in a ‘clearing’, i.e. a plaque, which is depicted by the transparent circles on the plate.