Home » Uncategorized » In Lake Mendota, an explosion of Zebra Mussels

From the Center for Limnology blog, Adam Hintertheur.

Somewhere along the way, someone lost a pair of Oakley sunglasses. Maybe they were blown off on a full-throttle boat ride. Or slipped from a shirt pocket while wrestling a fish on board. Whatever the cause, the sleek, black glasses with the reflective lenses sank eight meters (about 24 feet) and settled on top of the soft, silty floor of Lake Mendota.

Which is where Center for Limnology graduate student, Mike Spear, found them. Except the Zebra Mussels got to them first. 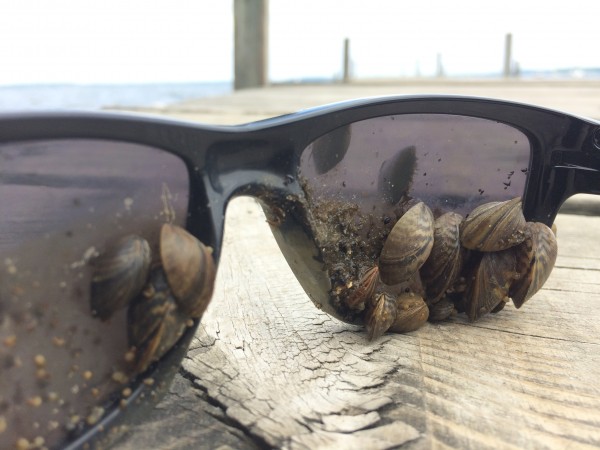 Photo from the Center for Limnology blog

Seeing how the invasive mollusks colonized a pair of sunglasses shows just how much their population has grown since zebra mussels were first detected in the lake in the fall of 2015.

“Last June zebra mussel density off the Hasler Lab dock was five per square meter,” said Spear. We haven’t quantified this year’s numbers yet, but it’s got to be thousands [per square meter]. I mean, you pick up a rock and there’s hundreds on that single rock.”

CFL researchers led by Spear have been documenting the mussels’ invasion. For the past few summers, Spear and a team of undergraduate students climb into their scuba gear and head to three sites in Lake Mendota, where they take transects at different depths – laying a quadrat (essentially a large, square hula hoop) on the lake bed, counting any zebra mussels within its meter-squared radius.

According to Spear, only a year ago you could lay down a quadrat on the muddy lake floor and find nothing.

Zebra mussel larvae, called veligers, can only grow on hard surfaces and they don’t really swim, they sort of drift along with currents and hope to eventually settle on something hard enough to latch on to. And Lake Mendota doesn’t offer many hard surfaces, aside from its shores.

“But now, if there’s a snail shell that’s big enough, it’ll be colonized, a leaf with hard veins is colonized, even among this desert of silt,” said Spear. “So you have to think, if these veligers are settling randomly, for them to colonize these little tiny refuges among huge deserts of unsuitable substrate, they must just be raining down everywhere.”

Based on data Spear and his crew collected last year, a high number of tiny little zebra mussel larvae isn’t that surprising, but seeing it in action is still almost hard to believe.

“We’re having to re-imagine how we’re going to sample,” Spear said. “That’s how much this changes things. We have to throw our sampling routines out the window because it’s changed so much, it’s not feasible to do the same thing anymore. Now we’re going to have to get paint scrapers and underwater suction to try and get the samples we need. It’s crazy.”

The Center for Limnology blog will be posting updates on the Zerba Mussel research as the summer progresses, so stay tuned in for more information. Next week the CFL will tackle the first impact of a mussel invasion- algae.