This post to us comes from Dr. Jim Lattis, director of UW Space Place.

On December 21, Jupiter and Saturn, now in our evening sky as they have been for months, will appear very close together — so close that, depending on your visual acuity, you might need binoculars or a telescope to separate them!

A conjunction, an apparent coming together, as close as this between the two giant planets is relatively rare. It has been about 400 years since the last conjunction this close! Although the closest apparent approach of the two planets to each other comes during our daylight hours on the 21st, they will still be quite close by dusk, when they will become visible.

Because the motions are relatively slow, the two planets will appear quite close together for several days before and after the closest apparent approach, so plan to look for them a few days both before and after the 21st in case sky conditions do not cooperate. Sunset on the 21st, coincidentally also the day of the winter solstice, will be at nearly 4:30 p.m., so the planets will start to become visible low in the southwest by around 5 p.m. See the image below, which shows the pair of planets in relation to the Moon, Mars, and some bright stars. 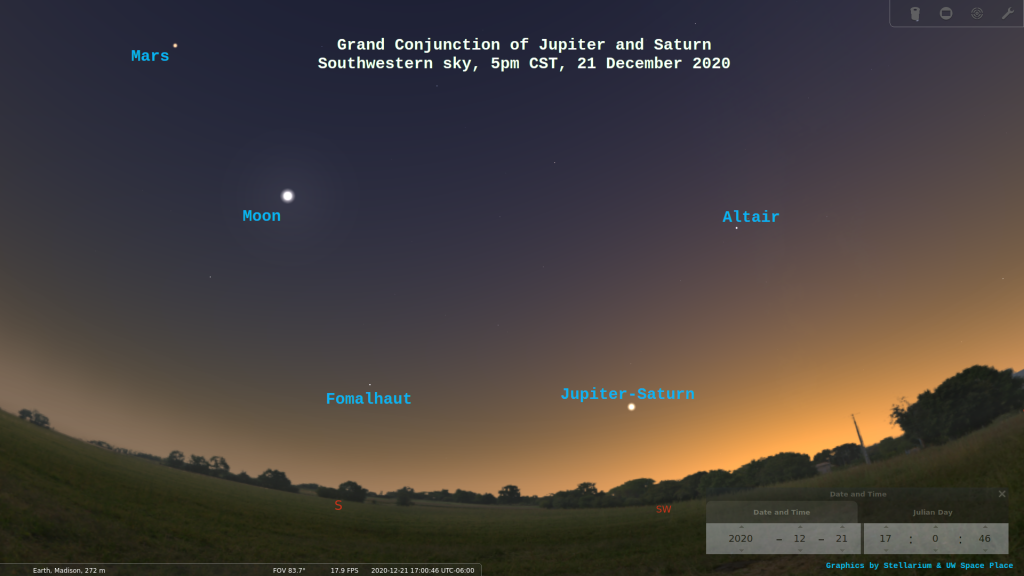 Jupiter and Saturn will converge on December 21, as shown in this simulated night sky.

At their closest approach, Jupiter and Saturn will be separated by an angle of only about one-tenth of a degree, which is, for example, about one-fifth the diameter of the full moon. This is close enough that binoculars and many telescopes will show them both in the field of view at the same time. The image below gives a simulation of the view through a telescope eyepiece, although the actual appearance will vary from one instrument to another. Some or all of Jupiter’s four Galilean moons should be visible, even in binoculars, and in a telescope you might see a hint of Saturn’s rings, not to mention a few background stars, such as the nameless one in the lower right of the field catalogued as HIP 99314. 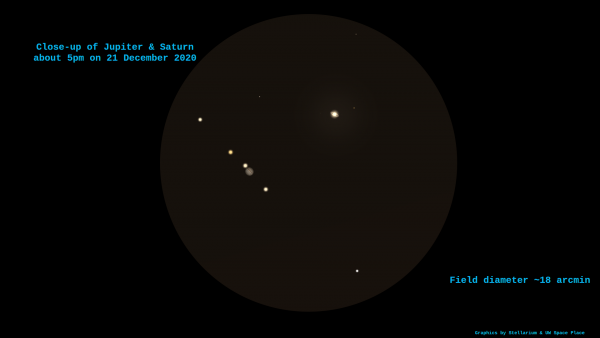 A simulated view of the planets through a telescope shows how both Jupiter and Saturn should be visible in a single view.

Of course, Jupiter and Saturn are not particularly close to each other at this time in terms of actual distances across the solar system. It is simply that on the 21st, the Earth will have moved into position such that our line of sight passes closest by both planets, making them appear close together, as shown in the diagram below.

The planetary orbits are shown approximately to scale, but not the planets (red dots) or Sun (yellow dot). The diagram does not show that the orbits of Jupiter and Saturn are actually inclined slightly, 1.3 and 2.5 degrees respectively, relative to the plane of the Earth’s orbit. These inclinations mean that an actual alignment in the geometrical sense almost never happens. And even if it did, the “alignment” would still be only a peculiarity of the Earth’s point of view. 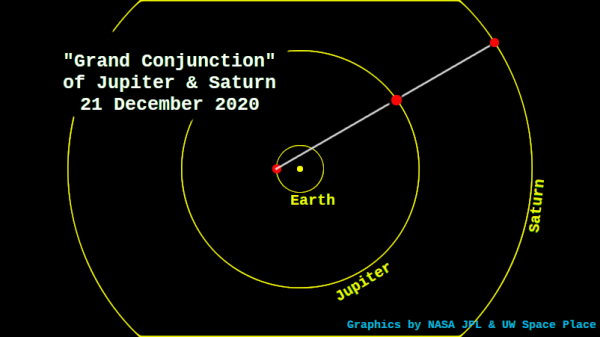 Thanks to the geometric positions of the three planets, Jupiter and Saturn will appear to converge at the same point in the night sky.

The actual close approach, as opposed to the apparent close approach on the 21st, of Jupiter and Saturn occurred earlier this year in late October, when the two planets lined up as seen from the Sun.  See diagram below.

At that time, although lining up, except for the inclination difference, as seen by an observer on the Sun, from the Earth they were still separated by a noticeable angle. Earth’s counterclockwise orbital motion, which is much faster than that of the other two planets, has progressed about one-sixth of its path around the Sun since then. Meanwhile, Jupiter, which completes an orbit in about 12 years, continued to overtake Saturn, which takes close to 30 years to complete an orbit, to bring them into position for the upcoming rare grand conjunction in our evening sky this month. 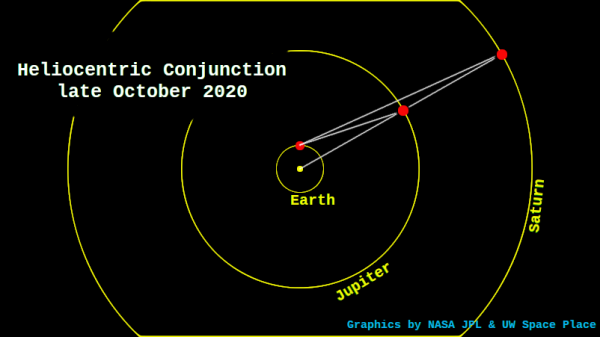 Jupiter and Saturn were actually closest together in October this year, when they were aligned from the view of the Sun.