This post was written by student science writer Mary Magnuson 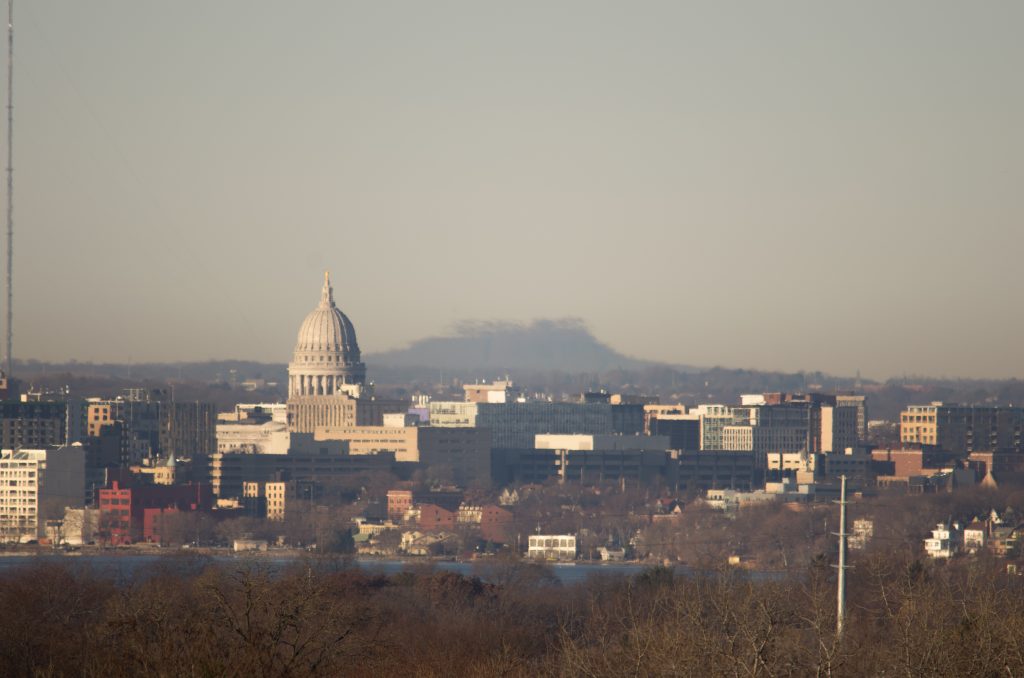 Thanks to atmospheric distortion, the distant Blue Mound appears to loom as a mesa west of the Wisconsin State Capitol. (Photo by Tim Wagner)

The morning of December 2, the Madison skyline looked considerably different — as if the city had been transported out west, where mountains and mesas tower. In an image captured by Cooperative Institute for Meteorological Satellite Studies atmospheric scientist Tim Wagner, an atmospheric phenomenon made a dark mound appear, which looked similar to a plateau rising above the city.

But, as Wagner explains, the dark figure was nothing more than a mirage — one caused by warm air rising and bending the light that passes through it.

Usually, the higher up you go, the colder the air gets, at least in the lowest parts of the atmosphere. But on calm, cold nights, the Earth’s surface and the air around it cool faster than the atmosphere, so air that’s higher up might stay warmer than the surface air at nightfall and into the early morning. When this happens, it’s called an inversion.

Wednesday night, Wagner says the huge difference in temperature between the surface and the air, and the dryness of the air that night, caused a stronger inversion than normal. And this inversion caused light passing through the warm air to bend and refract in strange ways.

“You know when you look into a swimming pool at something on the bottom, and the object isn’t actually where your brain tells you it is? That’s because the light is refracting, or bending, as it passes through the water,” Wagner says. “The same thing happens with air when we see sharp changes in temperature.”

On Wednesday, the heat differential made light bend around the curvature of the Earth, Wagner says. And, in turn, that made Blue Mound, a big mound and the highest point in southern Wisconsin, about thirty miles west of Madison, appear much larger than it actually is, dominating the skyline like a mountain from where Wagner’s camera sat. 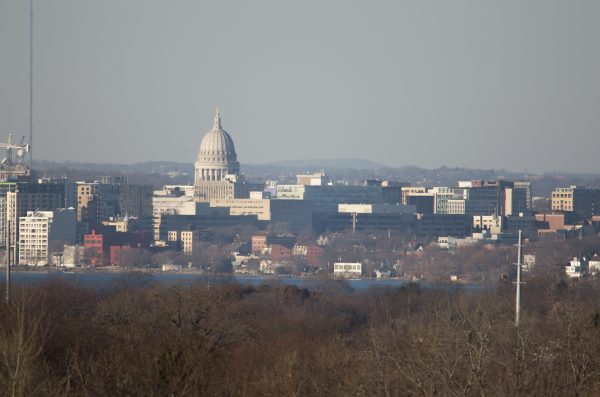 On most days, Blue Mound is visible in the distance as a faint hilltop. (Photo by Tim Wagner)

Since the mirage made the mound look larger than it really is, scientists would call it a “superior mirage.” Wagner says this kind of mirage is particularly rare, especially on land. If warm air moves over a cold body of water, superior mirages may arise since it takes a long time for cold water to warm up, but it’s much harder for the same kind of phenomena to arise over land.

“I’ve only seen a superior mirage one other time in my life , and it was in a much more expected location: I was at the shore of Lake Superior in May. That was cool, but it was nothing like this.  They’re often seen in places like Antarctica or Greenland that have a cold surface, and they’re not uncommon over cold bodies of water like the Great Lakes or the northern oceans. However, never in my life would I have expected to see such an amazing example of this over Madison,” Wagner says.