Give most kids a basic microscope and a leaf or a drop of pond water, and they are in awe of the, well, microscopic patterns and organisms they can now see. Give a cell biologist a transmission electron microscope (TEM), and they can understand how structures within cells are organized – and how changes in the structures contribute to diseases.

Now, thanks to the efforts of several University of Wisconsin–Madison researchers and funding from the Howard Hughes Medical Institute (HHMI), UW–Madison scientists will soon have a cutting-edge new TEM. It will augment an older version of the technology currently housed in the Materials Science Center that lacks some of the new features that are helping to revolutionize biological electron microscopy.

“What we were missing was more capability for 3D TEM for people imaging tissues or organs, which for biomedical research is essential to understand the cellular basis of disease,” explains Marisa Otegui, UW-Madison professor of botany and genetics.

Microscopy access on the University of Wisconsin-Madison campus is certainly not lacking. Between powerful light microscopes that allow researchers to monitor living samples and the new Cryo-electron microscopy (CryoEM) initiative that allows researchers to see the three-dimensional (3D) architecture of molecules down to individual atoms, a microscope exists to answer nearly any research question.

For example, Otegui’s group studies how signaling factor proteins on the surfaces of plant cells are degraded inside the cell when it is time to turn the proteins off. The cells have protein escorts (no really, they are named the ESCRT proteins) that help internalize the surface proteins and send them to a sorting compartment called an endosome. This process is carefully regulated by plant and animal cells. When it goes wrong in people, it can lead to diseases such as cancer or neurodegenerative diseases.

TEM shows structures that would not be visible at the resolution of light microscopy. Using TEM, Otegui and her lab group, in collaboration with Ahlquist’s group, found that endosomes in plant cells string together, rather than exist separately. From Buono et al, Journal of Cell Biology, 2017

“Just last year, we used electron microscopy to get three-dimensional information and show that these endosomes are completely different than we expected,” Otegui says. “We had the completely wrong idea of what these endosomes looked like, so just having the basic level of understanding their structure helped us understand the endosome and the cellular machinery.”

But the $1.3 million price tag for a new TEM was more than any individual lab on campus could afford. This is where HHMI comes in. 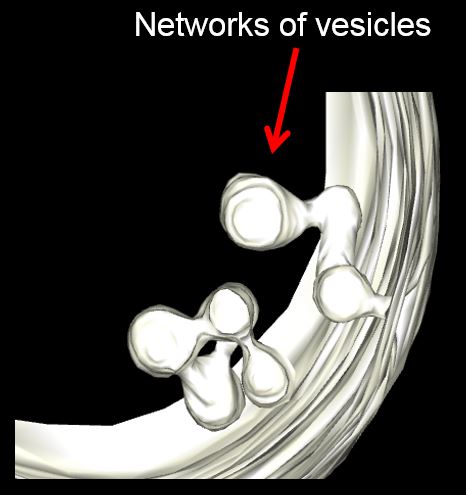 By stacking TEM images from sections of the plant cell, a 3D rendering is generated.

The organization recently announced funding for “transformative technologies,” for which any of its members could apply and use toward purchasing cutting-edge instrumentation. Three HHMI investigators on campus – neuroscience professor Ed Chapman and Morgridge Investigators Paul Ahlquist and Phil Newmark – wanted to apply for the funds, but they were not sure on what, exactly.

“Ed asked a group of people on campus: ‘What do we want to request? What instrument will be a game changer for our labs and for campus?’ And we decided to request a new 3D TEM,” Otegui recalls. “Ed, Phil and Paul agreed to support the instrument that the group has identified as our priority. It was such a generous way to recognize not only what they needed individually but also what the campus needs.”

Crucial to securing the money from HHMI was an additional $700,000 in contributions from campus partners to cover the installation and upkeep of the microscope. These include: The Morgridge Institute for Research, the Office of the Vice Chancellor for Research and Graduate Education, the School of Medicine and Public Health, the UW Carbone Cancer Center, the College of Letters & Sciences, the Department of Biomolecular Chemistry, and the Laboratory of Cell and Molecular Biology. Otegui and colleagues on campus secured the campus funding and submitted the HHMI proposal in under a month — an impressively quick turnaround time for a multi-million dollar grant.

“HHMI only selected those proposals that had very strong support from the institutions; without that money, we wouldn’t have the HHMI funding,” Otegui says.

The new microscope will be installed in the Laboratory of Cell & Molecular Biology in Bock Labs and will be available to all researchers on campus.

“Acquiring this microscope is a great example of trust and collaboration across campus,” Otegui says.