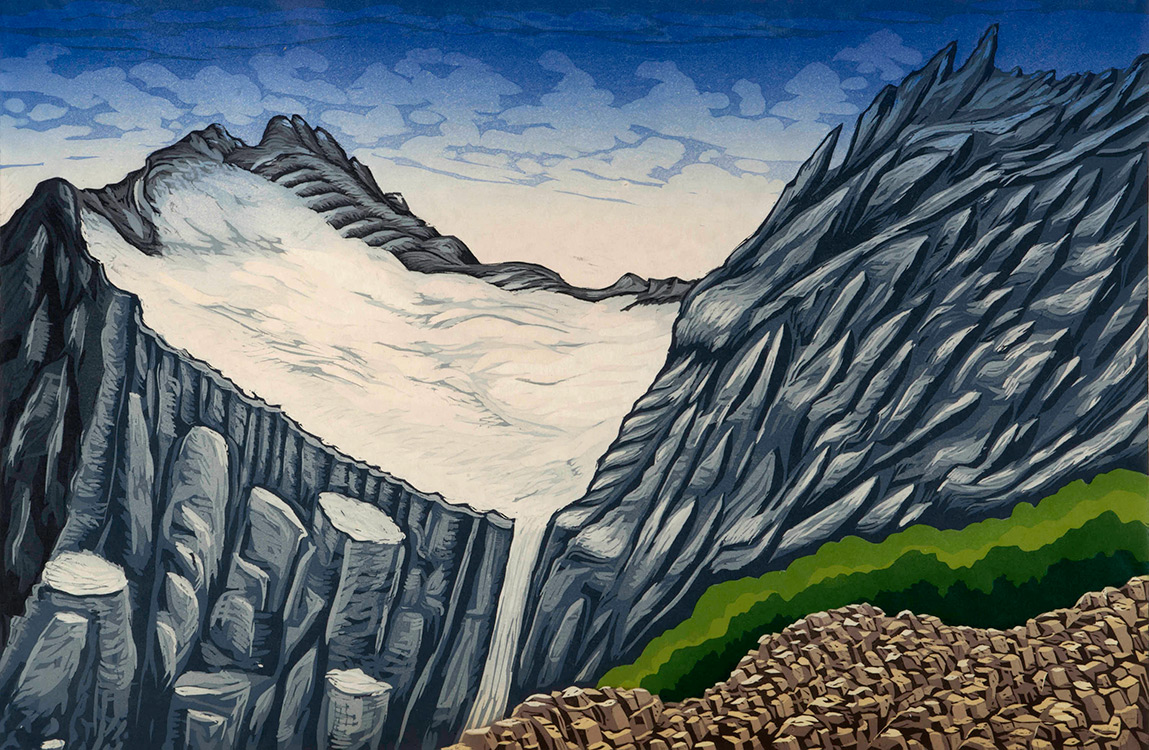 This post is an excerpt of a story from Clemson University about the work of Clemson art professor and UW-Madison alum Todd Anderson and Tandem Press master printer Bruce Crownover. Read the full story here.

Since its founding 100 years ago, Glacier National Park has lost more than 80 percent of its glaciers. Over the past six years, Todd Anderson says, he hiked more than 500 miles through that park for a project called “The Last Glacier.”

Prints of “The Last Glacier” are now in the collections of the Metropolitan Museum of Art in New York and the New York Public Library, The Library of Congress, Clemson’s Emery A. Gunnin Architecture Library, UW-Madison and Yale University, and have been acquired by several private collectors. 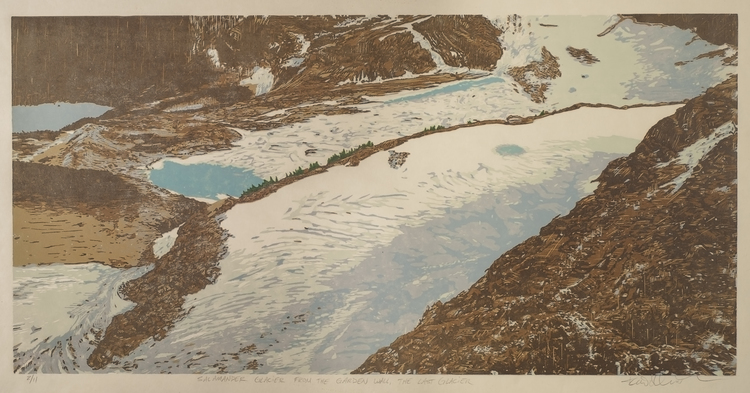 In museums, Anderson says, “when we look at a painting from the 1800s it helps us understand what people’s values were, what people thought about.

“It’s just as important when future generations who go to museums and get to see this work. It’s not just saying, ‘Oh, there used to be a glacier here,’ but it’s also saying, ‘This is a little bit about us.’ In a very, very small way. Of what we valued as a society and what we thought about, the challenges we were trying to face and engage.”

Working with collaborators — and the National Park Service and glaciologists — also amplifies the message and grows the audience. Anderson initially planned to work alone, but the glaciers were so vast and distant – 10 to 15 miles from an access road – that he enlisted Crownover and van Coller to help cover the territory.

The result, Anderson said, is “three very unique artistic visions of essentially the same thing. The hope is that by presenting the viewer with three different versions of three different artists, that folks might be able to latch on. If they don’t like my work, maybe they’ll really like Bruce’s. Or if they don’t like Bruce’s, maybe they’ll like Ian’s.” 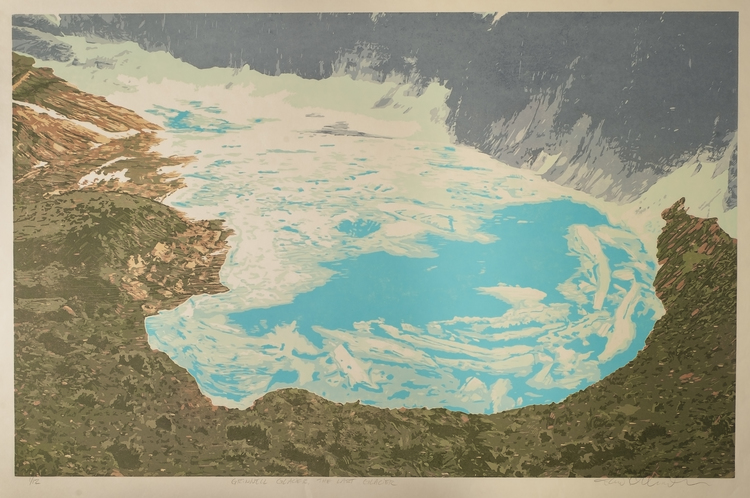 If you’ve stood on a glacier, or on a mountain two miles high, standing in front of Anderson’s finished prints will stir a familiar chill in the air, as if someone opened a window 10,000 feet up. The prints reveal scars from the violent upheaval, subduction and collision of the Earth’s crust. You’ll feel the cool blues of the ice, the ancient gray of the rock and yellow, purple, pink and blue of sunrises and sunsets seen through thin air.

Anderson spent weeks each summer working in situ, researching the glaciers – which ones to document, how to access them, seeing them at different times of day as the sun shifted shadows and revealed new details. He hiked, sketched and photographed, getting to know each one before it ceased to exist.

Back in his studio, where the prints come to life, a mixture of fluorescent bulbs balance the blues, reds and greens to shine as white as possible.

In the middle of the space sits a printing press, perched atop tiny feet, perfectly level. The press is new; at least it’s new to Anderson. It arrived recently by freight to his home in one of Clemson’s leafy neighborhoods. The press is his six-burner gas range, where the ingredients of his art – science, nature, light and the wonder of the Rocky Mountains — mingle and fuse.

Slowly, they develop as reductive woodcut prints in a process involving time, pressure and the deliberate carving of a landscape until nothing is left but a picture, a life cycle that mimics his subjects. Anderson chose to recreate the glaciers as woodcut prints because, he says, he wanted “an organic, visual language,” and woodcuts, by their nature, provide a “visual texture.”

Both glaciers and prints are constructed of layers, but  while glaciers are built from the bottom, prints begin at the top. They require the artist to complete the piece in his mind, then work backward.

Anderson transfers a sketch to a rectangular block of basswood, imported from Japan, then begins working in negative space – using fingers and hands that once routinely clung to rock to slowly, expertly, carve away wood, creating an image by removing what he doesn’t want in the print. The first layer he carves away, from the top of the block, will be the first image on the paper, the bottom layer of color. 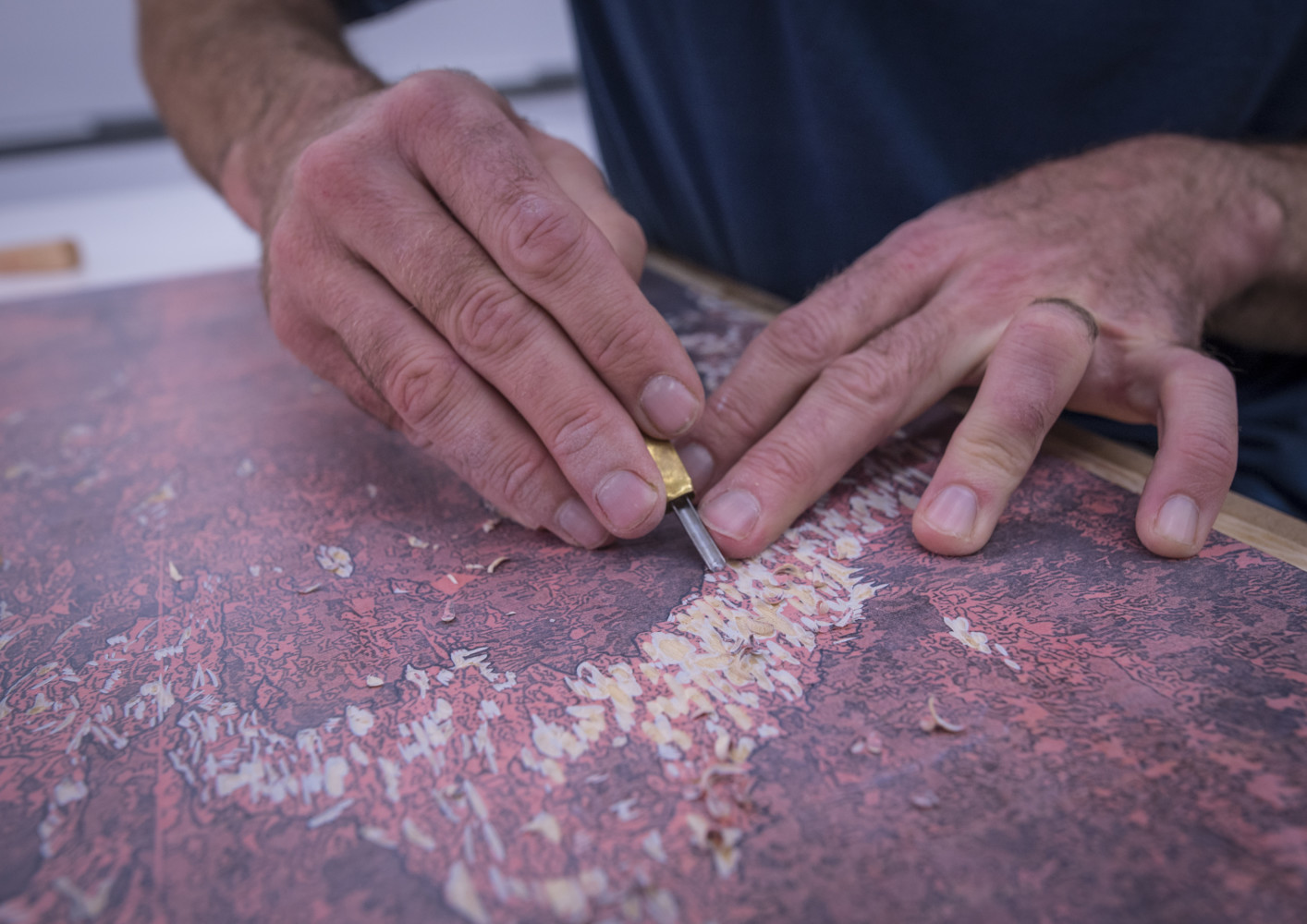 Todd Anderson, assistant professor of art and printmaking at Clemson University, carves out a plywood “stamp” he is using to create a reductive woodblock print of a glacier for “The Last Glacier”, a collaboration with fellow artists Bruce Crownover and Ian van Coller, in his home workshop in Clemson, S.C., Nov.9, 2016. The intention of the project in a nutshell is to share the beauty of the changing world. (Photo by Ken Scar)

He has to print light colors first, and he’s constantly calculating “the value of the color and the opacity of my ink, so that I can make a whole image look right. At least in my mind how it looks right.”

One layer, one carving, one color, one pressing at a time, all the while thinking backwards, or upside down, removing negative space from the top that becomes the bottom. Eventually, the full image appears. But, at a cost.

“By the time I get done making these artworks, the blocks themselves are really exhausted, and there’s no way of going back and remaking the artwork,” Anderson says. “The process is mirroring the fate of the glaciers themselves.” 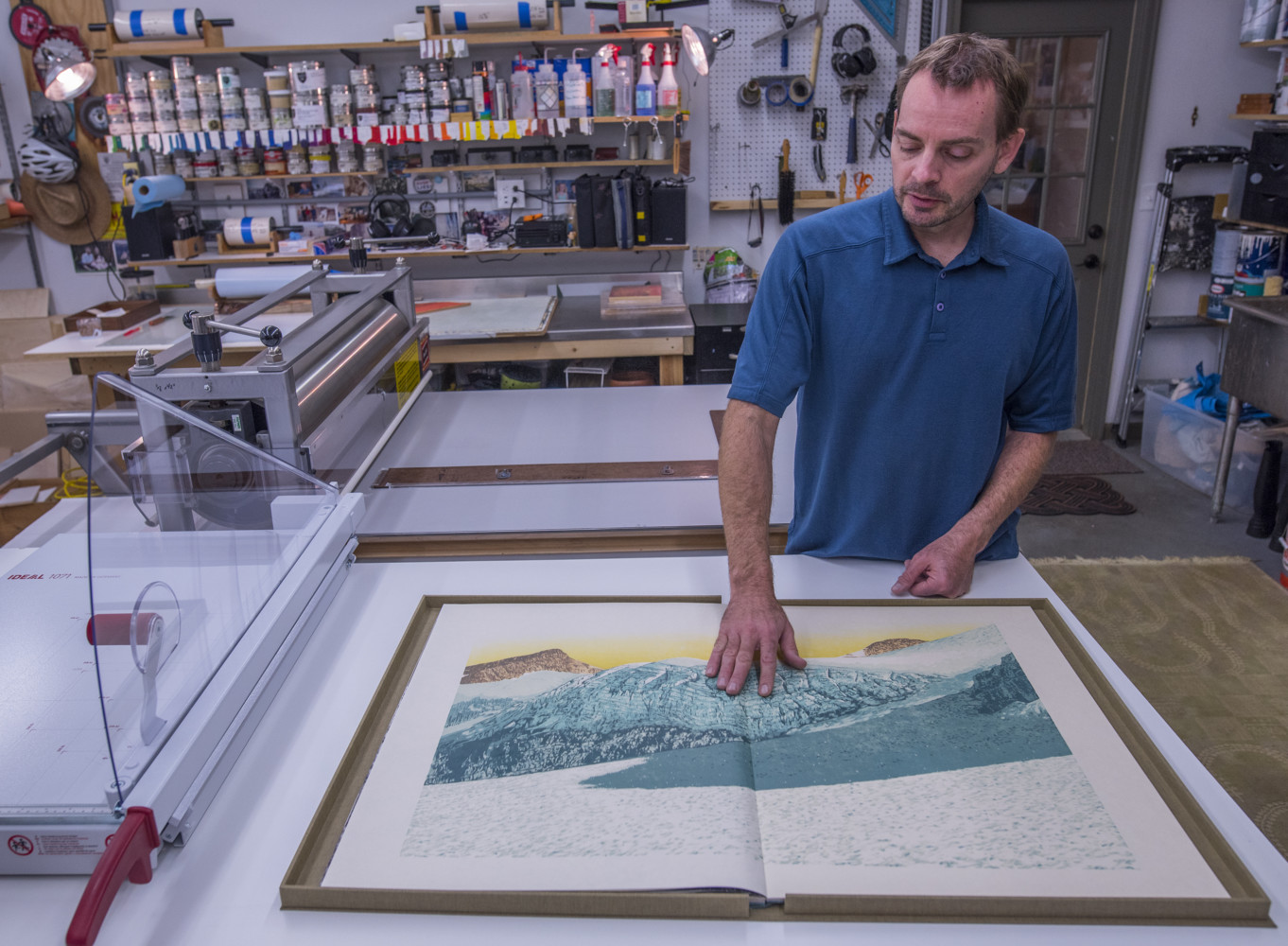 Todd Anderson, assistant professor of art and printmaking at Clemson University, displays one of his reductive woodblock prints in “The Last Glacier”, an artist book of 23 image plates of glaciers in Glacier National Park, Montana, by him, Bruce Crownover and Ian van Coller, in his home workshop in Clemson, S.C., Nov.9, 2016. (Photo by Ken Scar)

Anderson, whose work is supported by the South Carolina Arts Commission, the Sustainable Arts Foundation and the National Endowment for the Arts, said he doesn’t create “message” art. He’s not delivering a political statement. Not directly, anyway.

“There’s a complexity to these ideas” of art, experience, climate change, he said. “What I’m trying to present as an artist is visual complexity. But there’s moments where, when it works right, you can get lost in these things and you start seeing the cobwebs. You start seeing things. There’s an experience that art can give you, which is just wonder, and that’s what I’m trying to do.”