Update on December 7: Thanks to your votes, IceCube made it to the finals! Now’s your chance to vote once more for IceCube’s cosmic ray discovery to be Science magazine’s breakthrough of the year.

Four billion years ago, in a violent clash of matter and energy, an otherworldly type of particle known as a neutrino was created and began its long journey to Earth. In September of 2017, the neutrino’s cosmic collision course came to an end as it crashed into an atom of ice beneath the South Pole, generating a brief flash of light. That light was captured by dozens of sensitive detectors frozen in the ice, triggering worldwide alarm bells that something worth watching was happening in the night sky near Orion’s left shoulder.

That neutrino, and the associated bursts of electromagnetic radiation captured by telescopes around the world, produced our first good evidence of where cosmic rays come from, solving a century-old mystery of their origin. With neutrinos loath to interact with most matter, the surest way to intercept them is to stick a lot of mass in their way. That’s where IceCube, headquartered at the University of Wisconsin–Madison, comes in. A billion tons of ice beneath the South Pole surveyed by thousands of light detectors, IceCube constantly watches the entire sky for these slippery particles, giving us insights into some of the universe’s most extreme events, including those capable of creating the highly energetic particles constantly raining down on Earth known as cosmic rays.

Now’s your chance to vote for IceCube’s groundbreaking discovery as Science magazine’s Breakthrough of the Year, an annual competition that surveys the past year’s biggest scientific advances and elevates one to the top slot. The first round of voting is open until Wednesday, Dec. 5, and the finalists will be up for a vote starting Dec. 6. The top vote-getter will be announced as the people’s choice award on Dec. 20, along with the magazine’s own selection. 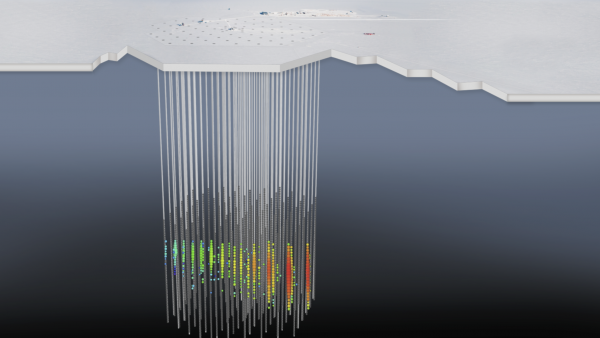 A representation of the September, 2017 neutrino event in IceCube. The strings carry sensitive light detectors, and those detectors that captured the neutrino event are in color.

Cosmic rays were first identified in the early 20th century as mysterious radiation coming not from the ground — where radioactive elements had recently been discovered — but from the sky. In 1912, Austrian physicist Victor Hess proved that the radiation increased with elevation by taking his instruments up in hot-air balloons, demonstrating that cosmic rays came from space. Scientists soon confirmed that cosmic rays are a collection of energetic particles, such as protons, bombarding Earth, where their collision with the atmosphere releases a shower of radiation.

But the ultimate origin of cosmic rays remained obscure. Because they are charged particles, cosmic rays do not travel in a straight line from their origin to Earth, but are whipped around by the magnetic fields pervasive throughout the universe. Neutrinos — tiny, nearly massless subatomic particles — don’t have that problem. They are neutral, and so travel unimpeded by magnetic fields. Their rare interactions with normal matter also mean they can pass through dust, planets and stars without stopping, making them ideal messengers of cosmic events. And because neutrinos are produced in the same events capable of producing cosmic rays, they can report information about these very energetic, violent cosmic events. 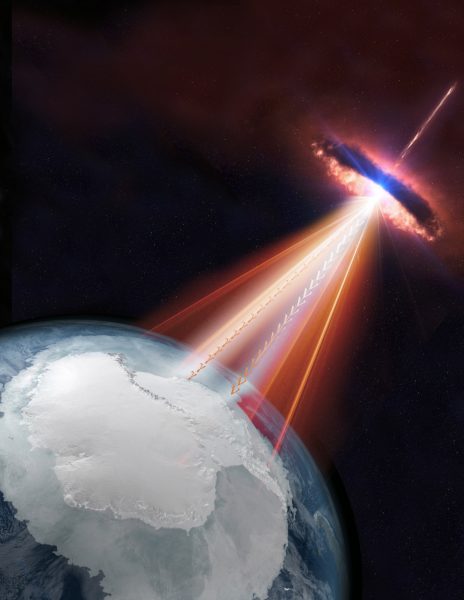 An illustration of a blazar ejecting neutrinos and gamma rays toward Antarctica, where IceCube is based.

What the neutrino captured by IceCube in 2017 pointed to was a distant galaxy in the Orion constellation known as a blazar. Blazars are galaxies shooting out twin jets of matter from rapidly spinning, supermassive blackholes at their centers. The neutrino’s incredible energy triggered an automated alert from IceCube to other telescopes around the world and in orbit. Turning toward the blazar, those telescopes saw a burst of gamma rays coming from the same source, further pinpointing the blazar in that part of the night sky as the likely source of both the neutrino and the gamma rays. The dual messengers of neutrino and gamma rays also demonstrated that the blazar was indeed powerful enough to accelerate cosmic rays to their high energies. The nail in the coffin came from IceCube’s trove of historic data, which showed a burst of neutrinos coming from the same source in previous years.

IceCube’s cracking open of the enduring mystery of cosmic rays was announced with dual papers in Science magazine on July 12, 2018 and at a press conference at the headquarters of the National Science Foundation, the principal funder of IceCube, which is an international collaboration of hundreds of scientists. Take the time today to vote for IceCube’s discovery, and come back in a week to vote again in the final round.