On June 7, the summer’s first blue-green algae bloom turned much of Lake Mendota a thick, putrid green color. Researchers at the University of Wisconsin–Madison Center for Limnology concluded that several factors — including run-off from local farms, multiple days with hot temperatures, and low winds — created near-perfect conditions for an algae bloom to occur. 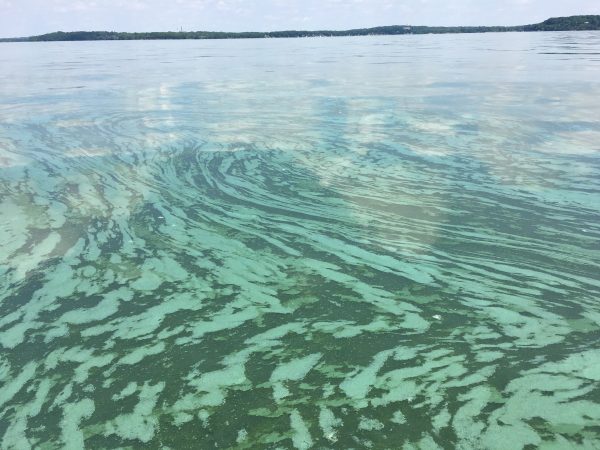 Captured at a deep-water buoy on Lake Mendota, the algae bloom could be seen spanning the entire lake. Photo by undergraduate researcher Anna Schmidt.

But there was a new suspect too: invasive zebra mussels, first found in Lake Mendota in 2015, are the latest blow to a lake buffeted by stresses.

“The invasion of zebra mussels into Lake Mendota and the downstream lakes is a game changer for these ecosystems. How the lakes respond to stressors will be fundamentally different than before,” says Jake Vander Zanden.

Vander Zanden is Director of the Center for Limnology and has been studying invasive species for two decades.

Zebra mussels are filter feeders that consume microscopic free-floating algae in the water. They attach to hard surfaces in lakes and reproduce extremely quickly.

“If you pull anything solid out of Lake Mendota, it’s going to be covered in mussels,” says Adam Hinterthuer, an outreach specialist for the Center for Limnology. 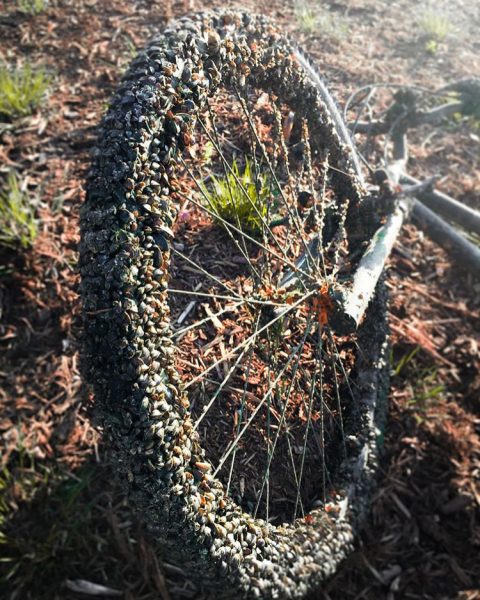 A bicycle pulled from the lake near Alumni Park. The bike is coated wheel-to-wheel in mussels. Photo by Mason Muerhoff.

Because they process and filter so much water — each mussel can filter one liter of water per day — a temporary benefit of the mussels is that they can cause lakes to appear much clearer. However, they prefer not eat the blue-green algae, also known as cyanobacteria , that make up potentially-toxic blooms in the summer.

With zebra mussels essentially clearing the water for cyanobacteria, conditions were perfect for their population to explode overnight in early June. The spring’s above-average rainfall carried phosphorus from nearby farms into Lake Mendota, feeding the algae. Then a spike in temperatures ignited the situation like a match.

“If anything wants to grow here, it’s got plenty of nutrients,” says Hinterthuer.

Lake Mendota is considered a eutrophic lake, meaning that it has an excess of nutrients like nitrogen and phosphorus, which allows for an overabundance of aquatic life. Zebra mussels were found in Lake Mendota much later than in other nearby lakes, but researchers knew it was only a matter of time before the invasive species found its way into one of the most studied lakes in the world.

“It’s boaters,” says Hinterthuer.  “The closer a lake is to a major road and the number of boat launches in it, greatly increases the likelihood that it gets infested.”

The Center for Limnology echoes the “Clean Drain Dry” mantra of education campaign Stop Aquatic Hitchhikers! when using boats of any kind on lakes to limit the spread of invasive species that hitch a ride on boat trailers, bilge water or live wells.

“It is critically important to stop these species from spreading to our lakes in the first place,” says Vander Zanden.

Once established, zebra mussels are some of the hardest invasive species to control. Their microscopic larva, called veligers, can float in water for several weeks before finding a hard surface, making it easy for them to hide until boats are launched again in a new lake.

Other species can spread even without water. The spiny water flea is another invasive species first found in Mendota in 2009. Their eggs can survive in lake mud as long as it remains wet, so cleaning things like muddy anchors is also crucial to preventing species invasion.

Hinterthuer also cautioned that several species often closely follow zebra mussel invasions. Round gobies, which are predators of zebra mussels, have yet to be found in Mendota but are already in the Great Lakes and have moved into several Wisconsin streams. Gobies can compete with native fish for food sources and are voracious predators of fish eggs of other species.

While not yet found in Mendota, researchers are examining if  we’ll see these mussels in local lakes soon. They haven’t been found in inland Wisconsin lakes but are prevalent in Lake Michigan.

“They can grow on each other, and they’ve carpeted almost the entire bottom of Lake Michigan,” says Hinterthuer.

Studying lakes can be a difficult and unpredictable task, Hinterthuer says: “Imagine if everything we knew about the forest, we knew because we had stood at the edge and tossed a trap in it and dragged it out.”

Yet despite these challenges, Lake Mendota remains one of the most studied lakes in the world, and work persists to better understand what’s next for the lake’s inhabitants.